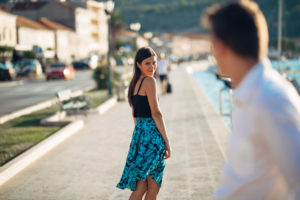 Osmology, or the science of smell research, has determined that men and women are attracted to each other via selective chemical messengers called pheromones. These are arousal-stimulating chemicals that signal sexual desire, sexual readiness, hormone levels, fertility and the deepest emotions. When released by the body, certain pheromones can work like magic to attract members of the opposite sex. The term pheromone was coined by two hormone researchers, Karlson and Luscher, who created the word from two Greek origins: pherein, meaning to bring or transfer; and hormon, meaning to excite.

Pheromones are primarily perceived through olfactory sensors, and studies suggest they are excreted by several areas of the body, including the skin, sweat glands, saliva, and urine.

Pheromones are linked to some of the most crucial stages in our lives … from breast feeding to mate selection. Studies have shown, for example, that breast-fed newborns are able to distinguish between a breast pad worn by its mother and one worn by a stranger. In a crib, the baby will turn quickly away from the unfamiliar breast pad … and turn towards his mother’s.1

Even your soul mate must have the right pheromones …

You may even pick your soul mate by subconsciously reacting to pheromones that transmit their genetic compatibility. You may be familiar with the landmark white tee-shirt test in which women consistently preferred the odors of tee-shirts that had been worn by strangers who were genetically compatible with them … and were actually turned off by those who were genetically incompatible. 2 What’s more, the odors they preferred reminded them of their boyfriends.

[box]Try Pheromones Risk Free! Put The Science of Attraction To Work For You – Guaranteed! CogniScent Pheromones from NutriStand.com[/box]

Pheromones can act as powerful catalysts of sexual attraction. As humans secrete these chemicals through perspiration, they are subconsciously detected by the nose, brain and nervous system. Only about 10 percent of men give off significant amounts of androsterone, a select pheromone that seems to give them what many call sex appeal. These men may not even look sexy yet through pheromone-release they send out powerful signals of attraction.3

Men primarily release androsterone through their skin and hair. And while both men and women excrete trace amounts of it through their urine, men excrete up to four times as much as women do. This particular pheromone, which is produced by the adrenal glands of both sexes, is also present in sweat under the armpits of both sexes. In addition, it is present in smegma, the substance secreted by the sebaceous glands of the penis and vagina.

Researchers have found that women secrete at least one other attracting pheromone from their vagina. Studies of the vaginal secretions of sexually alluring women have demonstrated the presence of copulin, a pheromone which is mainly present in these fluids. The appearance of these chemicals appears to correlate with hormonal variations corresponding with changes in the female menstrual cycle.

According to Masters and Johnson, products containing pheromones can be used for correcting sexual dysfunction. The researchers say that the sense of smell is under used in the treatment of sexual problems, and they admit to utilizing pheromone-scented lotions in their clinic to help couples benefit from the therapy offered there. The research group conducted a 10-year study that confirmed the sexual turn on aspect of these chemical attractants.

One study confirmed that pheromones are commonly used by the perfume industry. Although companies claim to use these compounds as a carrier of the fragrance, the added pheromones are most likely the secretly seductive ingredient. Since perfumes are primarily marketed based upon their ability to appeal to the opposite sex, the pheromone-perfume combination makes perfect “scents”!

What to expect when you use pheromones

People using pheromones have reported a wide range of benefits, including4:

Elevated mood: Both men and women who describe themselves as depressed report an overall sense of well-being, positivity and energy, when wearing pheromones. Researchers at Pherin Pharmaceuticals, Inc., inspired by the therapeutic benefits of using human pheromones, are now engaged in clinical trials of their use to alleviate panic attacks and mood disorders.

Enhanced working relationships: A journalist researching human pheromones tried them to see for himself what the results were like. “I immediately noticed that the people I work with were looking at me and smiling more than usual. I finally realized that it was me, that I was making more eye contact with them and sending a message of confidence I didn’t normally project.”

[box]Try Pheromones Risk Free! Put The Science of Attraction To Work For You – Guaranteed! CogniScent Pheromones from NutriStand[/box]

Pheromones are generally considered safe and have no known side effects; however, they may cause subjectively unwanted effects. For example, the use of a pheromone formula may result in the attraction of undesirable members of the opposite sex. Thus, we suggest careful and calculated use of these compounds at all times.

Perfumes may or may not contain pheromones (marketers are not required to list them on the product label). Therefore, initial applications may be tested in small dosages of one or two quick sprays. When pheromones are purchased separately, they can be added to a favorite cologne or perfume in amounts recommended by the manufacturer.

To heighten the passion of the sexual experience, pheromones may be strategically applied in erogenous zones just minutes prior to the encounter. They may also be used to build up to sex, in which case they should be applied an hour or two beforehand. If the desired effect is not noticed, the amount can be increased in small increments.

The scent of attraction is very real and human pheromones play a powerful role. If you want to boost your confidence and increase your attractiveness to the opposite sex, human pheromones might be just what you are looking for.